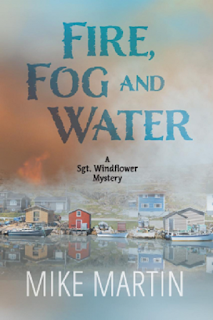 Windflower goes on runs to settle him down and exercise his dog.  When he slips and slides down to a boulder, his dog gets excited by what's hid behind it.  He thinks it's dead animal, but no.  It's a dead human...

Ottawa Press and Publishing and Net Galley let me read this book for review (thank you).  It has been published and you can grab a copy now.

As they work on who might have killed him, they also has have a hit and run victim and an arson fire.  For a small town in Newfoundland, they have their share of problems.

Then they learn the burned cabin was creating pills that were illegal.  The owner of the cabin and his son both deny any knowledge of the illegal activity.  Someone didn't agree and blew the father up with a package bomb.

While all this is going on, Windflower is going through his own personal crisis.  He's been dreaming  and some of them are confusing.  His aunt interprets them and tells him to use an Indian ceremony to settle him down.  He does and it works.

He finds there were more people involved with drug smuggling.  He's a busy man in this story.  The best part of the story is his relationship with his wife and child.