The Dog Who Knew Too Much by Krista Davis 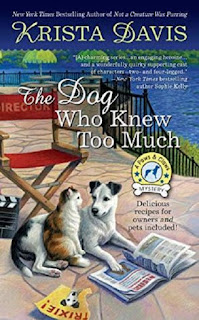 Waytail is a dog town.  Everything is is doggie named and doggie themed.  So when a famous pooch named Pippin come to town, they have events to celebrate and hope it will bring them even more business in the future.  When they arrive amidst fanfare and excitement, the first thing that happens is that they have a fight in the lobby.  The man who plays a cranky old man in the series was cranky. He's not going to stay at the hotel.  He'll find himself a quiet place.  He leaves and they get the rest of the crew settled.

Berkley and Net Galley let me read this book for review (thank you).  It will be published December 26th.

It turns out Pippin likes to escape and go snooping by himself.  This bothers Holly because she doesn't want Pippin to get lost and because her dog, Trixie, goes with him.  To let him get some exercise and have plenty of new smells, they go for a walk up the mountain.  When Trixie runs off the path and then does her haunting howl, Holly hates to hear it.  It means she's found a dead body.  It was a lady in town who bred boxers.  She's a nice lady, who would kill her?

Then a man tells her Trixie is his dog.  She rescued her and she's had her for years now.  She won't give her up.  There's a dog snatcher in town.  Is he it?

Then the cranky old man is found dead.  Who's killing them and why?

I was surprised by who the killer turned out to be...

Email ThisBlogThis!Share to TwitterShare to FacebookShare to Pinterest
Labels: Book Faerie, book review, Krista Davis, The Dog Who Knew Too Much