The Body in the Dumb River by George Bellairs, Martin Edwards 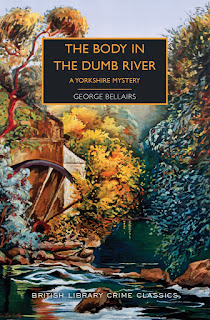 There's a big flood in the small villages along the river and besides the damage to the homes, someone locates a dead body caught on a tree.  He's identified fairly quickly and then becomes the hard part.  Who was he and who killed him?

Poisoned Pen Press and Edelweiss let me read this book for review (thank you.  It will be published December 1st.

Jim Teasdale was dead before he was tossed in the river.  They find he had two lives.  He told his wife he was on the road all week as a salesman and just came home on the weekends.  During the week he operated a game at the fairgrounds and made what money he could.  He met a young, serious woman there and he wanted to marry her but she told him to wait.  She was content to live with him during the week and help him operate his game.  Then she got pregnant. When he went home on his weekly visit, he didn't return.

He had married into a horrible family.  His father-in-law hated him, his wife and daughters despised him but they didn't intend to let him go.  But who killed him?  It takes some effort to ferret out the truth but the inspector finds it and almost dies because he did...