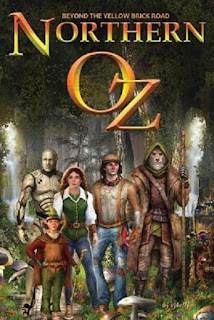 Everyone knows the Baum stories, but did you ever hear of Northern Oz?  Things are different there.  Once the lands were connected but an evil sorceress put a spell on the land and now they are separate.

The author generously shared his book with me for review.  It has been published and you can get a copy now.  If you enjoy fantasy, you'll enjoy this book.  It's a fun read.

Kristi has read all the Oz books and is disappointed there aren't more.  Then she meets a nice man, gets bullied by her female classmates and meets her friend Obo, the clown  He helps her pick up her books and apologizes for not being on time to save her the rough up.  His boss comes out and fires him for being on the other side of the street.  He makes it worse by telling him he'll be replaced by a robot...

To cheer each other up, they decide to go to the carnival.  There's a hot air balloon there and when they go to examine it, the wind steals it away.  They try to help hold it but the next thing they know, it's in the air...

She and Obo have no idea of how to run it so they just ride.  Then the balloon begins dropping and hits the trees.  Soon they are on the ground.  But they have no idea where they are.  Luckily they have landed in Northern Oz.  Unfortunately, there is a war going on now.

You meet many different characters, some nice, some not.  They have friends they make that help lead them to the wizard but they get ambushed on the way, certain paths can't be used, and you have to be careful what you eat.

The witch is determined to beat the wizard.  But the wizard isn't dumb and he's ready to resist her efforts.  It was fun watching the characters interact.  Some were quite lovable, some were very dangerous.  You will enjoy traveling along with Kristi and friends and watching what's happening.