The Protective One by Shelley Shepard Gray 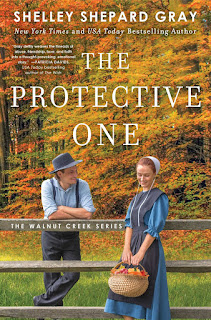 Elizabeth has been seeing David for some time.  He's their neighbor and her parents approve of the match.  But he's not loving, he doesn't think the way she does, and she decides to end it.  He's not willing to, though, and persists in stalking her.

Gallery Books and Edelweiss allowed me to read this for review (thank you).  It will be published January 21st.

Will has been a friend for years and he feels grief from Andy's death just like she does.  Andy was part of the group of eight who were friends for years.  He committed suicide and shocked them all.  David has no sympathy for him which also drove them apart.

She and Will begin dating.  David smears her name to his parents and hers.  She refuses to take him back.  When she comes home from a date with Will, David and his parents are in the living room with hers.  They want to know what happened.  She tells them and David gets mad and starts calling her names.  Then his parents join in and her parents invite them to leave.  They've never seen David like that.  They begin to side with her on her decision.

David continues to try to catch her alone so he can say nasty things.  Will asks him to stop.  He doesn't.

In the meantime, one of Elizabeth's customers from work is being abused by her husband.  She's at the fair trying to escape him and start anew when he finds her and hits her in public.  Will and Elizabeth and another couple are there and the men go to her rescue while one of the women calls the police.  Elizabeth comforts her customer.

Everything settles down for both of them after that and they have happy endings.