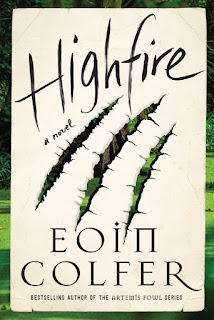 He lives deep in the swamp and he's lonely.  Being the last of your kind is no fun.  Then he hears explosions fairly close and goes to see what is going on.  A man is trying to kill a boy.  He's throwing grenades at him.  He picks up the boy and then hikes the latest grenade back at the man and sinks his boat.

Harper Collins and Edelweiss allowed me to read this book for review (thank you).  It will be published January 28th.

Vern is a dragon.  He likes to smoke and he drinks Absolut.  He watches Netflix.  He has to maintain a low profile if he wants to live.  The boy he brought home is called Squib and is very willing to work.  He introduces him to his friend, who also isn't human and he takes over some of the dragon duties.  Soon he has them all because the friend needs to hibernate and rejuvenate.  Vern and the kid get along.  But the man trying to kill him isn't giving up...

The man after him is a crooked cop who wants his mother.  He convinces himself if he kills the kid, he can offer her sympathy and she'll share her bed then.  He's also trying to take over the local drug lord.

There's a battle and the dragon gets hurt.  Squib's mother nurses him back to health.  Then the cop follows Squib to the island.  He's brought friends with him.   There is an all out battle.  Can the wounded dragon defend them?  Or will the cop win?

This was a very entertaining read.  I like dragon stories and I like Vern.  Give it a try, it'll keep you reading.