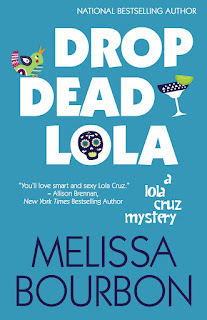 Lola's cousin is getting married and Lola is in the wedding party.  She has plenty of curves herself and this fluffy dress makes her look fat, but her cousin loves it on her and it's her wedding.

Henery Press and Net Galley let me read this book for review (thank you).  It will be publisahed January 28th.

While the bachelorette party is going on, everyone is embarrassed but having fun.The next day, Lola gets a client that doesn't believe her son committed suicide.  The fun is over...

She talks to everyone who knew him.  He had a fiance, was planning on getting married, his business was going well, and Lola begins to think it might be murder, too.  But why?

When she and Jack go to talk to Marnie, the Mom, she's in her car almost dead.  They call for an ambulance and then realize they are probably on the right track.  Murder it is.

Then Lola gets an idea and has his girlfriend look in his box of papers again.  What she finds in there gives her the name of the murderer.  Then she sets a trap for him.  She plays Marnie and he shows up.  Which one will win?