The Pirate's Children by Michael Lloyd 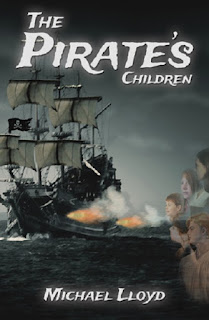 This one is a wild ride that is fun to read.

It begins with a funeral.  Eleanor is seventeen and has three siblings.  When she meets with the lawyers, she learns she inherits the estate which is bigger than she ever imagined.  When she finds out her father is alive but in a Spanish jail, she's determined to save him.  She knows his old boat is still in the area so she goes to find it.  She finds the last crew member on it raising animals.  She tells him she's going to restore the boat to seaworthy condition and go after her father.

She arranges that with the lawyers and finds herself a young orphan who is willing to guide her around the more unsavory parts of town.  She finds her captain in jail for gambling.  She pays his debt and takes him home with her.

Her man who runs the estate teaches her and her brother how to fight with various swords and pistols.  They practice every day while the ship is being repaired.  They also hunt for more crewmen.  It's hard because all of them have been pressed into service because of the war going on.  They end up taking the orphan boy and his brother.  Eleanor and the captain have different opinions on how to acquire sailors and he's not happy.

When they sail, it takes a bit for Eleanor to get her sea legs.  She's very glad she's wearing pants and not a dress.  It's not long before they meet an enemy ship.  The whole crew fights hard, even the children.  This is just the beginning of the sea battles...

Eventually they make it to where her father is prisoner.  Is he still alive?  Can they sneak in and get him?  And will they be able to fight their way back home?