The Lilac Princess: The Princess Series Book 1 by Wanda Luthman 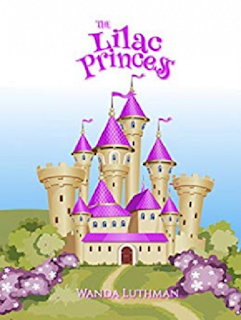 The Princess isn't allowed to go out  past the castle walls.  It's too dangerous.  But the fields of purple flowers draw her.  When a boy at the market inside the walls gives her a flower, she loves the way they smell.  He tells her they are lilacs.

BooksGoSocial and Net Galley let me read this book for review (thank you).  This has been published and you can get a copy now.

Next time she sees him she asks if he can get her a cloak to wear so she can sneak out.  He brings her his dead father's cloak.  She sneaks out with the peasants as the sales end and plays in the lilacs.  She sees an animal approaching her but doesn't know enough to be afraid.  He's a dragon and he asks her if she would like to go on a ride.   She accepts and suddenly she is missing.  When her little friend sees the posters, he feels guilty and he decides to save her.

He's not too big and he has a small sword and a knife but he got her into it and now he's going to get her out of trouble.  Of course, the dragon has some thoughts about that.

The battle is vicious and the dragon is injured.  He asks them for forgiveness.  Could you forgive someone who was trying to kill you?