Murder With a View by Diane Kelly: Series: A House-Flipper Mystery (#3) 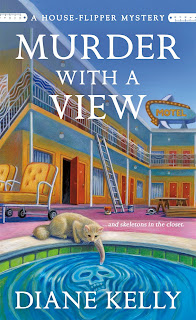 Whitney and her cousin, Buck, go to a tax sale to bid on an old run down motel.  There's a man there with more money than the cousins have but Whitney talks about a piece of property that's up for bid first and the man with the money bites and bids for it.  While he's in paying for it, the motel comes up.  They had to use all the money they had to get it, but they did.  Now they have to rehab it.

St Martin's Paperbacks and Edelweiss let me read this book for review (thank you).  It will be published February 9th.

First they find a man using one of the rooms for a temporary shelter.  He seems nice and volunteers to work with them for some extra money when he gets out on the road again.  They agree.

The next discovery is even worse.  Whitney finds a dead man in one of the beds.  He's a well-known singer and publicity over his death gets going right away.  One of the cops is Whitney's boyfriend so she calls him to come and join the others.

There is no real trail or clues to find the murderer, so a lot of questions are asked.  Several people get on the suspect list but they quickly come off.

Whitney almost loses her life when she figures out who did it.  Will her cousin and boyfriend get there in time?