The Progress of a Crime : A Fireworks Night Mystery by Julian Symons, Martin Edwards (Introduction by) 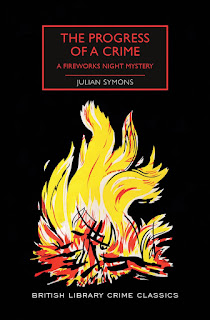 It was Guy Fawkes's (bonfire) night and the whole area is filled with people when some motorcycles show up.  It's a group of young men and they are there to get even with a man who had harassed them.  First they shoot fireworks at him.  He gets angry and goes after them.  Soon he's on the ground dead and all the boys are gone...

Poisoned Pen Press and Edelweiss allowed me to read this book for review (thank you).  It will be published on March 2nd.

It was dark and almost no one got a good look at who did what.  The journalists and the cops go to work asking questions and trying to find suspects.  They determine it was a group of boys.  Most carried knives and that's how he died.

This is a police procedural where the journalists did more work than the cops.  They determine who was involved and they knew who had knives.  But finding ways to prove it is harder.  There's family trauma, witnesses changed their stories, and the trial is a battle of lawyers.

Part of the ending was suspected but the other part was a real surprise!

It was a bit slow reading but you keep reading to find out what's going to happen next...