Death of a Messenger by Robert McCaw 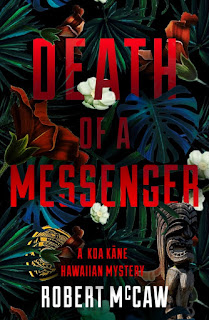 When Kao gets a call about a dead body on military property, he coordinates the search with a military policeman.  He's not fond of the man he has to work with because he looks for easy answers to close a case.

Oceanview Publishing and Edelweiss allowed me to read this book for review (thank you).  It has been published and you can get a copy now.

The body has been mutilated.  An eye is missing, the chest has been cut in several places, and his genitalia have been cut.  Now they need to find out why.

With a bigger search going on, they find that the cave he was found in was at a historical site and there was another entrance in.

This story is set in Hawaii and Kings were buried in unknown locations and the ones who put the King there were killed.  That means that all the artifacts found have great value on the black market.

Kao has a number of suspects that he searches back history on.  It's very hard to determine who did it.  Several could have.  But Kao doesn't give up.  He finds a connection between the telescope research unit and the burglaries.  And he begins to think an important person may have been the killer.  Can he prove it?