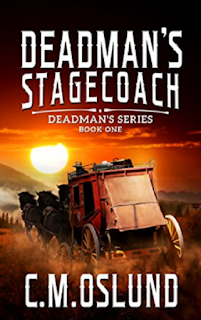 The stage was on its way to the next town when gunmen showed up.  They shot at them, the riders shot back and when it was over, one man was dead.  The dead man was coming to work on the ranch Luke and his sister Annie lived on.

BooksGoSocial and Net Galley let me  read this book for review (thank you).  It has been published so you can grab a copy now.

At first they thought the bandits killed Adam but in time they found out that someone on the stage had done it.  He came with little luggage so they didn't immediately cotton on to a motive.  But they were going after the killers even if they had the wrong people in mind.

There's a lot of tracking that the part Indian men do well at.  As they catch up to them, there are shootouts and the number of suspects dwindles.  But when they found out he was shot on the stage by one of those riding with him, there's a whole new direction to go.

This was a good western and it's not until you get to the end that you find who the killer is.  Life wasn't easy in the cowboy era.