A Side of Murder by Amy Pershing 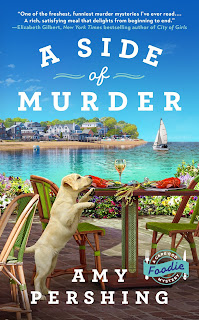 Samantha always had a love of food and she wanted to be a chef.  So she heads to the Big Apple to go to school and then goes to work in a restaurant.  But then her aunt dies and she's willed the house.  She decides to go home.

Berkley and Edelweiss let me read this book for review (thank you.  It will be published on February 23rd.

Sam is visiting old friends and getting used to being back in this small town, when she finds a dead body in the pond.  It's the local gossip.  She calls the police and the chief immediately suspects her as the murderer.

Sam also inherited a puppy which she's not too happy about because he's a big dog.  Given time, she falls in love with him.  How can you not love a dog that loves you?

Since the cops think she was the killer, she starts investigating herself.  Someone drowned her and it wasn't Sam.  The more she finds out, the nastier the woman seems.  She was blackmailing people.  But who didn't want to pay anymore?

There are two men who are part of the bad doings in town.  One I didn't suspect.  The other wasn't the nicest guy.

Sam ends in a confrontation with the killer.  But he has the gun and intends to kill her.  Who will save Sam?

Email ThisBlogThis!Share to TwitterShare to FacebookShare to Pinterest
Labels: A Side of Murder, Amy Pershing, Book Faerie, book review