The Diabolical Bones by Bella Ellis 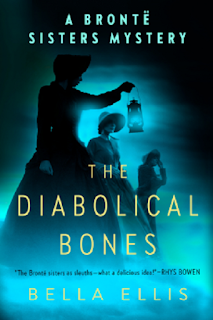 This is a tale of the Bronte sisters.  Each of the sisters has a very different personality but they work well together.  They are writing poetry and hope to be published. But they hear about some bones found not far from their residence so they want to find out who it is.

Berkley and Net Galley let me read this book for review (thank you).  It will be published on February 16th.

The bones appear to be a child's but the doctor tells them the child was probably between the ages of ten - twelve.  The child had lots of physical ailments from not enough to eat.  Nobody has any idea who it is.

They begin asking questions.  There are a lot of superstitions that get in the way of facts.  The longer they work on it, the more people get involved.

The killer is not unusual but the child's mother is almost a killer herself.  She's the last one I would have suspected.

The pace of the story is a bit slow and there is a lot of interesting conversations but it's a good mystery.