A Fatal Lie by Charles Todd 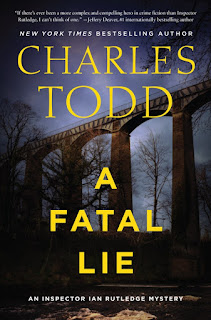 A boy has gone fishing and when he gets a tug on his line, he's thrilled.   But when he pulls it up, he finds a dead man...

William Morrow and Edelweiss let me read the book for review (thank you).  It will be published on February 16th.

As Ian begins looking for the murderer, it gets more and more confusing.  There are three more deaths, there's a child missing, war veterans are involved, and there's even a woman who is partly crazy.

It's a long hunt for Ian and things don't become clear until the end.  He spends a lot of time spinning his wheels while trying to find all the people involved.  Then several lie to him.

When he finds the child's mother has gone away with the suspect, he races after them.  The man told her he had found her daughter.  Will Ian get there in time to stop another death?