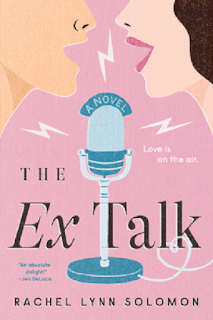 Shay is a producer at a radio station.  She's been there for ten years.  Then a journalist joins them.   He's tall and good looking and has an article about their Mayor that is a scandal.  Shay gets tired of hearing about his Master's Degree.  Then her boss wants them to do a show together...

Berkley and Net Galley let me read this book for review (thank you).  It will be published on January 26th.

He wants her and Dominic to do a show together.The name of it would be Ex Talk.  They would pretend they were dating in the past and broke up and now were trying to be friends.  It bothers Shay because it's a lie but they get together and make up a story to tell about it.

One thing neither of them saw coming was that they really did fall in love working together.  They keep their relationship hidden but their boss lets folks know it's not what they have been lead to believe.  The callers turn against them and the outcome is that Shay leaves and Dominic stays.  She's upset enough she refuses to talk to Dominic.

Will they ever get together again?