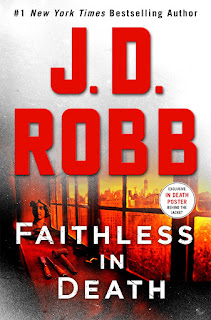 This is a very interesting read.  It's about a sculptor that was killed in her studio.  When Eve goes to call on the woman that reported it, she finds it took her an hour to call it in.  Her fiance comforts her and Eve starts asking questions.

St. Martin's Press and Edelweiss allowed me to read this book for review.  It will be published February 9th.

She finds out the woman is part of a group that sees itself as religious.  To Eve, it seems like a cult.  Young women are sold to older men.  Once you are married you are expected to have children.  Women aren't allowed to work anywhere except in the home.  The more babies you have the better.  Some women are drugged and then tied down and raped.  This cult is not nice.  Eve is sure one of them killed her victim because it was a lesbian affair.  That's not allowed either.

Eve and her boyfriend and the various staff members search for proof so they can put them in jail.  It's a long search with bits and pieces of evidence that lead them on to another tidbit.

This cult has been around for a while, so it will take a lot of work to take it down.  But Eve is determined...