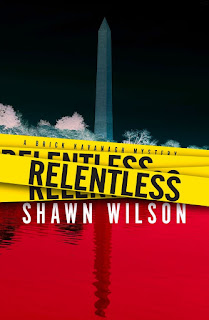 Brick Kavanagh is back. It's cherry blossoms season and everything is pink except the nude body floating in the tidal pool.

Oceanview Publishing and Edelweiss let me read this book for review (thank you).  It will be published December 8th.

It doesn't take long before they find another body.  Brick is doing all he can to find the killer when someone confesses and the DA wants to close the case.  The cops know he didn't do it but the DA doesn't care.  He confessed, that closes the case.

Brick talks to him and finds out he's taking the fall for someone else.  His family has been threatened.  The next thing that happens is that accused man commits suicide.  That doesn't stop Brick from looking for the killer.

There's plenty going on in this story.  He has a romance just beginning, he gets hit in the head and ends up in the hospital.  When he finally figures out the killer, he gets out of his hospital bed and goes after him.  I was surprised at who it was, did you figure it out?