Before She Disappeared by Lisa Gardner 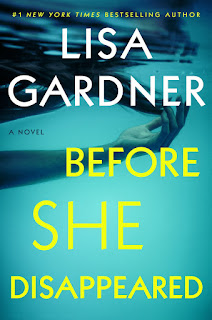 Frankie is a middle-aged lady who looks for missing people that the cops gave up on.  So far, she's found bodies, no one alive.  But she's hoping to change that.

Edelweiss and Dutton let me read this book for review.  It will be published January 19th.

Frankie is a recovering alcoholic.  It's still a battle with her.  When she finds a new case, she goes to the neighborhood the girl lived in and finds herself an apartment and a job.  She's night bartender and she lives above the bar.  For some reason, she's able to stay out of the booze.

Her biggest challenge here is that she's white and the neighbor hood is black.  They don't trust her and they don't want to answer questions.  Despite that she continues searching for the girl.

It gets more and more complicated as time goes on.  Another girl is missing, there is a fake university, and fake ID's are being created.

She finally puts things together in her mind and she goes to brace the man she thinks is responsible.  That turns into a showdown.  Will she live or will she die?