A Pairing to Die For by Kate Lansing 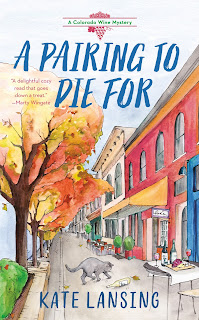 She has her own winery and her boyfriend has his own restaurant.  They share their products with each other and they are falling in love.  Then he's accused of murder and ends up in jail.

Berkley and Edelweiss let me read this book for review (thank you).  It will be published on January 26th.

Parker knows Reid wouldn't kill anybody and she tells the cop that.  But they have an eye witness.  Reid's family is there visiting but they won't put up the bail.  They think she's not a good match for their son.

Parker starts her own investigation.  It's slow going, people aren't telling her everything, and then she gets attacked and told to stay off the case.  She doesn't.

Reid doesn't get along with his family and she can see why.  They are cold and not very nice.  She goes to visit them again and finds that her attacker was Reid's father.  She calls the cops.

Then she discovers who really killed the victim.  The problem is that the killer is now after her...

Email ThisBlogThis!Share to TwitterShare to FacebookShare to Pinterest
Labels: A Pairing to Die For, Book Faerie, book review, Kate Lansing