To the Land of Long Lost Friends: No. 1 Ladies' Detective Agency (20) by Alexander McCall Smith 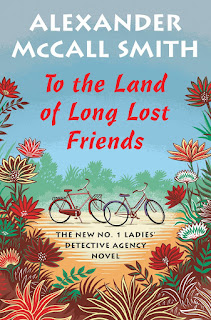 Precious is back again.  She's still being a detective with her assistant that thinks she's better educated.  She might be better educated but that doesn't give her more wisdom.  And Charlie is still there.  He works part-time for Precious and for her husband.  That makes him a part-time detective and a part-time mechanic.

Pantheon and Edelweiss allowed me to read this book for review (thank you).  It will be published October 22nd.

One day she thinks she is seeing a ghost.  When the woman sees her she hurries over to reconnect.  She explains the paper used the wrong name for the victim.  Precious is relieved and glad to see her again.  She tells Precious that her daughter is no longer in contact with her and that hurts.  Precious decides to look into it even though she isn't being paid.

In the meantime, Charlie is trying to figure out how he can up with the bride's price so he can get married.  He's in love but he's also poor and her father is rich.

Precious finds out the daughter has two boyfriends.  One is a preacher and he's a fake.  He uses the money and goods he's given for his own enrichment.  This is a real mess to straighten out without it shaming someone.  She finds a common denominator by accident and things get better.

Charlie's fiance introduces him to her cousin, he knows how to make money.  He want Charlie to disable vehicles if those who borrowed money don't pay it back.  Charlie thinks about it but decides not to do it.  When he meets her father he tells him he does not have the bride's price, whatever it may be.  He also tells him about the cousin's job offer and how he wouldn't take it.  That brings unexpected results.

I enjoy these tales.  There are a lot of traditions shown, the story moves slow and easy, and you feel like you are in Africa.  These are fun reads.