The House of Brides by Jane Cockram 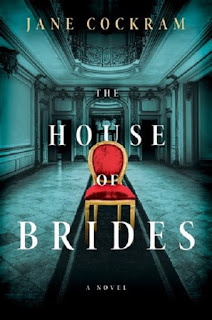 Miranda has been a rising star but when she offers an unusual solution to a problem on her blog, she gets shot down.  The human favor she'd been courting turns against her.  She goes home to recover and begin again where no one knows her.  Her father calls in a favor and finds her job.

Harper sent me an ARC of this book to read for review (thank you).  It will be published October 22nd.

When she sees a letter to her dead mother, she takes it to read it.  It's from the family home and a young teenage girl (her cousin) is writing asking for help.  She decides to go see what kind of help the girl needs instead of going to the new job.  She has to lie to her father to get enough money to buy an airline ticket to her destination.  Needless to say, he's angry when he finds out what she's done.   But more importantly, he tells her staying in the house isn't safe for her and to be careful.

When she arrives the person answering the door assumes she's the new nanny.  That's OK, she gives them another last name and takes the job.

What she finds is a real mess.  The girl who wrote the letter is the oldest.  The middle child is a boy and the youngest is another girl but this one is in a wheelchair.  It seems Mom was in a car accident and injured herself and the child but no one wants to talk about it.

Her uncle invites his sister over to tell her how to care for the children.  These are relatives she's never met.  She finds herself growing fond of the children but she doesn't trust the adults.  This is a very dysfunctional family with dark family secrets.

Will Miranda survive or become another victim?