A Cruel Deception: A Bess Crawford Mystery by Charles Todd 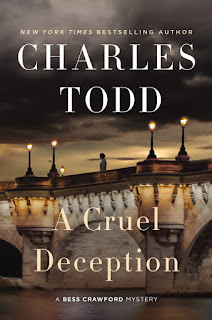 Sister Bess Crawford enjoys helping the soldiers recuperate from war injuries.  Some you can't help, and she grieves their deaths, but making the living feel better is a blessing.  Then she gets a message from the matron asking her to come and see her.  Why?  She likes what she's doing...

William Morrow and Edelweiss allowed me to read this book for review (thank you).  It will be published October 15th.

The matron asks her to quietly track her son down.  He's absent from the conference he was attending and he's not answering his mail.  She's  worried about him.  Bess agrees to look him up and heads out.

It takes her a while to find him and when she does he's addicted to morphine.  His wounds have healed but his mind has not.  A young woman has taken him in and tries to help him but he won't listen to her.  He won't listen to Bess either.  But then someone tries to poison him.  Now she will have to try harder to help him.

She finds out the poison laudanum came from a Captain that visited him.  She braces him and he said he didn't know it was poisoned.  She doesn't trust him.  Then the patient leaves the house and they can't find him.  An American pilot offers to help and finds him in the hospital in a bad part of town.  She talks to the doctor she knows and he sends an ambulance for him and takes him into his home for care.  The patient has been beaten badly.  He didn't recognize his assailant.

The doctor agrees to hypnotize him to find out what war horrors are gripping his mind.  Bess had an idea but now she knows why he's having the trouble he is trying to get past it.  She also has an idea about who might be trying to kill him.  After all, he tried to kill her, too.

Will they be able to identify and find him before he is successful in his deadly attempts?