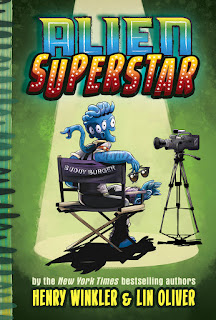 He's thirteen so the squad will be coming to remove his sensory enhancer.  That will make him no more than a robot and he wants to keep all his senses and his creativity.  When they come to get him, he runs home to escape.

Amulet Books sent me an ARC of this book to read for review (thank you).  It has been published and you can get a copy now.

He rushes home, gets in the spaceship he and his grandmother created and heads out.  They haven't had a chance to test the machine but it's better than being caught and altered.  It works.  He heads to earth.  They've been watching old films about earth and he transition can himself into earthling with a complete focus on doing so.

He lands in Hollywood and everyone assumes he's dressed as an alien.  He lets them think that.  Then he and his friend, Frankenstein go for a reading in a movie that stars an alien.  He gets the part, but the star isn't happy.  He's drawing attention and the star doesn't want to share.  Buddy, the alien, doesn't get all the nuances of the English language, so he says things they take as jokes, and he asks so many questions that he drives the director nuts.  Then he becomes a star...

Buddy's adjustment to earth is funny.  When he finds earth food doesn't nourish him (it just gives him gas), he gets desperate and he asks Cassidy, a girl he interacts with on the show, to help find him food he can eat.  When they test his space food and then apply that to earth food you'll be amazed at what he can eat.

He's finally settling in to life on the set when his space ship starts receiving transmissions.  He misses them.   In the next book you'll learn who sent them.