The Old Success by Martha Grimes 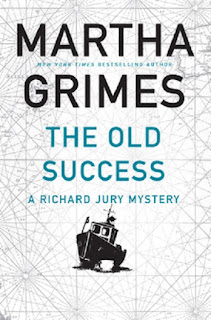 Richard Jury is back again.  He gets called in on a murder by seaside.  It's a woman and two little girls found her.  Trying to talk to the children is difficult.  They are hesitant and the mother butts in.  It doesn't take long to identify the woman but no one knows why she was shot.

Atlantic Monthly Press and Edelweiss let me read this book for review (thank you).  It will be published November 5th.

There are always odd characters and humor strewn around in this series and it makes it fun to read.  This ranged from a cold case years ago ( the retired cop who solved all his cases could not solve his daughter's death but he knew it wasn't suicide) and three current deaths:  the woman by the sea, a woman duster in the church, and a man in his home.

Before the end of the story, they have answers for all the deaths, as strange as they may be.  Policemen don't generally see the nice parts of life.  But they persist in doing their jobs.

I enjoy the Richard Jury mysteries.