The Christmas Dare: A Twilight, Texas Novel by Lori Wilde 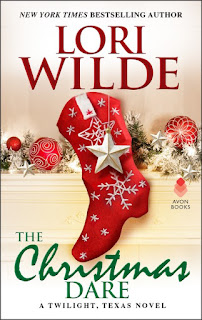 She's left at the altar as her fiance leaves the church with his best man.  He's in love, but not with her.  He's gay.  Her mother, the new Mayor of Dallas is mortified.  Kelsey is relieved.  He was a nice guy but they were only friends.  It was her mom that wanted her to marry him.  It was a good match for her political aspirations.  Then her girlfriend convinces her to take a two week vacation to get over it.  She doesn't know where to go so her best friend picks the destination and off they go.

Avon and Edelweiss allowed me to read this book for review (thank you).  It will be published October 22nd.

Her mother is totally controlling and has a fit because she's gone, but her girlfriend talks her out of going back.  She's astonished when they reach their destination to find her first love there.  He's divorced and has his own business.  Is there still a spark between them?  You bet!

She's still hurt until she finds out why he never contacted her again.  Her mother again.  The longer she's away she begins to see how her mother has been pulling her strings and making her do things the way she wanted them.  Kelsey needs to begin living her own life.  Finding Noah again is a great start...