The Outlaw's Heart by Amy Sandas 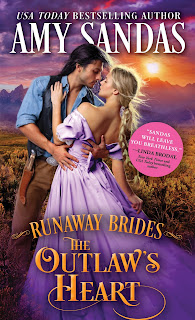 Evelyn finally found enough guts to leave her husband.  He took joy in beating her and she'd had enough.  As she rides the train west, she never expected to run into train robbers.  They asked her name and she gave them the name of a woman she met on the train.  She was amazed to be kidnapped by the men!

Sourcebooks Casablanca and Edelweiss let me read this book for review (thank you).  It will be published October 29th.

When she struggles with them, they knock her out.  When she awakens she's in their camp.  She makes eye contact with a man standing against a tree. He brings her water and a blanket and then he tells them they have kidnapped the wrong woman.  She's similar to the other, but she has the wrong color eyes.  They decide to take her back to their base and let their boss decide what to do with her.  The man who befriended her assures her she won't be harmed but she's still a bit scared.

She is to ride with him on the way back because he has the biggest horse.  He's a big man but he gives her room.  He always asks permission before touching.  They stop at at a ranch house so she can bathe and get new clothes.  There are two women there.  The one bringing her clothes sees her lacerated back her husband gave her and finds her some salve.  When Gabe finds out about her back, he's angry.  He's even more gentle with her.

When she reaches camp, the boss of the outfit says she can stay for a while to figure what to do next.  The men are rough around the edges but they sure are nice to her.

She finds herself falling in love with the big Indian.  He's having the same trouble with her..  Then her husband steals her back.  Can Gabe save her?