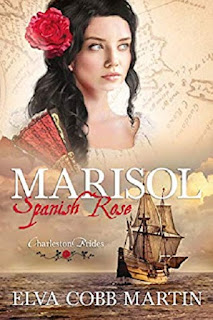 Marisol was out in the stables taking care of the horses when he assaulted her.  She wasn't defenseless but she didn't mean to kill him.  She just wanted to stop him.  He came from a moneyed family, she knew what would happen to her.  So she ran...

Wild Heart Books sent me a copy of this book to read for review (thank you).  It will be published November 12th.

She ends up for sale on the indentured servant' block.  There's a bidding war over her and she ends up on a ship heading out for resale in another land.  Then pirates board them and take the cargo, including the servants.  She's pretty enough she catches the captain's eye.  If things weren't bad enough, she finds she is with child.  Now she has to save them both.

The captain was once a minister but his wife died.  He offers Marisol a job as his son's governess.  She takes it but when she hears he is going to Cartagena, where her aunt lives, she and her son stow away on the ship.  When she's found, he's angry with her but she tells him her aunt can help him find his sister.

He dresses as a priest to escape the ship and accompanies her to her aunt's.  This is where things start getting exciting.  He and Marisol are falling in love.  Marisol finds that the mother of the man she killed wants her son.  She won't give him up, so Grandma steals him.  In the meantime, the captain has found his sister but they've discovered he's not a priest and they are coming after him.  He also finds out Marisol is a murderess and decides he can't love her.

This author keeps you reading and wondering how it will end.  It's a good read.