The Christmas Spirits on Tradd Street by Karen White 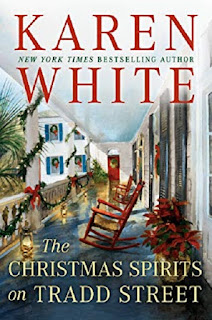 This is the first one in this series that I read.  Melanie sees and hears and smells ghosts.  She helps those she can and some of them help her.  She has OCD and does most things with a ruler so they are exact, or she'll rearrange everything on a shelf or in a drawer.

Berkley Books sent me a copy of this book to read for review (thank you).  It will be published October 22nd.

She has small twins that her cousin takes care of while she's busy during the day.  She also has her husband's sixteen year old daughter as part of her family.  The house they inherited and are rehabbing is full of ghosts going all the way back to the Civil War.

Jack and Melanie have a lot going on.  They are hosting an event at their house and Melanie is working on decorations.  Jack is writing a book and it's going well but then his agent leaves and he gets a young one who hasn't read anything of his and wants to change the kind of book it is.  They also have someone who wants the house they live in (he believes there is treasure there somewhere).  He's the one messing with Jack's agents.

There are mysteries everywhere, they have to sort out a code, match bricks, and finally determine where the last "treasure" is hidden.  There's a fight at the cemetery that has ghosts involved.

It's a good read but I didn't like the ending.  I'm sure the next book will sort that out but I still didn't like it.