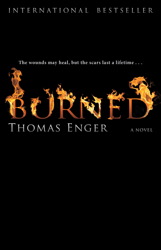 Simon and Schuster shared a galley of this book with me for review (thank you).  The book will be published the first week of October so add it to your TBR list.  This author is Norwegian and this is first book, but it certainly won't be his last.  It's also an excellent read.

Henning Juul is an investigative journalist who does a very good job.  In many ways, he does a better job than the police do.  It helps that he has an instinct that tells him even if the conclusion is logical, it's not "right".

He's suffered a terrible loss.  His flat caught fire and when he and his son attempted to flee the building, only he got out.  His son died, along with part of Juul's heart, and he had awful burns from the fire.  He also ended up divorced because even though he thought he still loved his wife, he couldn't live with her because of his guilt at not saving their son. As he returns to work, he realizes that's all he's got left in his life.

His first day back he finds himself following the murder case that has just been discovered.  A young woman is found inside a tent, buried up to her neck, with her hand cut off and her head almost unrecognizable because she was stoned to death.  This is a complex case with multiple players and personalities involved.

Mr. Enger writes a story thick with detail, where clues fall over each other and no one is exactly what they seem.  There are bad guys all around and the ones that should be good are not.  He leads you through Juul's coming back to life and learning he can still find excitement at the thought of following the trail of the killer; even if he may die because he is doing so.  The author also does a psychological study of several of the other characters in the story.

I found his writing fascinating.  He weaves his story together without giving you any real hints about how it's going to turn out.  I kept turning to pages to see what would happen next.

And, the best part, at the end of the book, Juul is moving past his son's death and asks a friend to see if they can find out who torched his flat.  As soon as it comes out, I'll be reading that book, too!

Happy reading.
Posted by Journey of a Bookseller at 2:38 PM

Sounds great. Definitely going on my tbr list. Thanks for the review.