To Love and to Loathe by Martha Waters 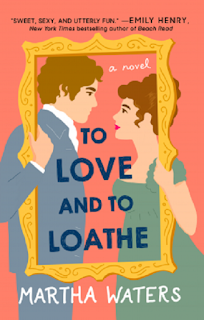 It started as a friendship.  They'd known each other for a long time and they loved sniping back at each other with words.  But now she's a widow and he's become the Marquess of Willingham after his older brother's death.  They make a bet that he will be married in a year.  He prefers having sex with no commitments, but he takes her bet sure he will win.

Atria Books and Net Galley let me read this book for review (thank you).  It is being published today.

Diana has agreed to give him sex lessons.  It seems the last lady he bedded shot him down as a lover.  They are just going to enjoy their time together and will move on after it's over.

As they get to know each other now that they are older, they find their feelings changing.  She was just a fun pest before but now Jeremy thinks she's a beautiful woman with more depth to her than he saw before.  She finds he has further depth than she anticipated also.

The longer they are together, the more they are attracted to each other.  They were never going to get married but things can change.

They have family and friends around them and they are observing their behavior.  The only alone time they is late at night.

Will they admit what has happened or go on their separate ways?

Email ThisBlogThis!Share to TwitterShare to FacebookShare to Pinterest
Labels: Book Faerie, book review, Martha Waters, To Love and to Loathe