Gumshoe in the Dark by Rob Leininger: Series: The Mortimer Angel Series 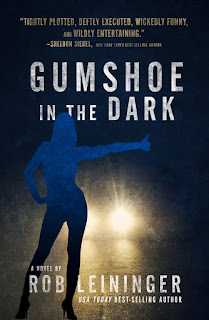 Nevada’s attorney general is missing.  Mort is looking for a man who steals money from women, but he keeps his eye out for the AG, too.  He's not enthused about trying to find the man because he's come into a large inheritance.

Oceanview Publishing and Edelweiss let me read the story for review (thank you). It will be published June 1st.

Mort stops and picks up a woman in a deserted part of the highway.  She's young.  She had a ride but the old man wanted more than money for payment.  She got her gun out and exited his vehicle.

Mort doesn't realize what he's getting into when he takes her with him.  She's got people after her but she doesn't know that either.

The people after her are not pleasant.  They've already killed two teens.  Seems like there are a lot of dead bodies that Mort finds...

There is plenty of action, lots of death, and it's hard for him to protect her and not get hurt himself.  His wife ends up joining them.  Now he has two to worry about.  But his wife gets them out of bad situation so she's not exactly helpless.

It's a fairly complex story with some choices that aren't all that pleasant.  It's interesting and you can't tell who is going to win until the very end.  It was a good read.