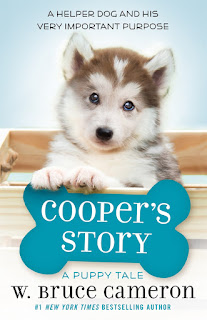 Cooper is a young  pup who is being adopted out.  He doesn't understand why he's going away from where he was birthed.  But it's not all bad, he has a boy who loves him now.

Starscape and Edelweiss let me read this book for review (thank you).  It will be published June 1st.

His boy is in a wheelchair and he trains Cooper to help him.  It's hard for the puppy at first but then he finds it fun and likes working.  He helps his boy and gets treats.

When they go to school, the principal tells him he'll have to leave his dog home.  His father talks to her but she won't change her mind.  So they take her to court.  She tells her side of the story and the boy tells his.  Then the judge says the dog can go to school with him.

It's fun to read about the training and how the dog feels.  He and the boy become a tight unit and have more adventures.

It was a good read.