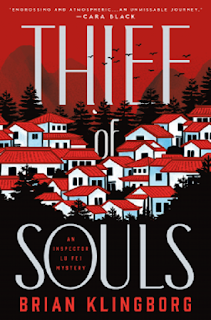 Lu Fei is a policeman in a small village where the crimes aren't serious.  But now he's called out on a murder...

Minotaur Books and Net Galley let me read this book for review (thank you).  It will be published on May 4th.

She's a pretty young woman but not only is she dead, it appears that some of her organs were harvested.  No one saw anything and the cameras in that part of the city don't work so it's going to be a hard hunt for the killer.

They find some cold cases that indicate there is a serial killer in their village.  The only common denominator besides the way they are killed is that they wore red. Earrings, shoes etc.

Then there are troubles within the police ranks.  There is corruption, hard feelings by those that were transferred away from better jobs, and just plain friction in the group that has to work together.

Lu Fei thinks he knows who did it but he's having trouble finding proof.  Will he find what he needs, or will the killer take care of him, too?