The Twelve Dogs of Christmas by Lizzie Shane 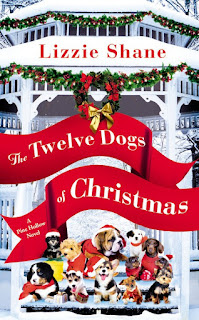 Ally came to Pine Hollow to help her grandparents out.  They ran a dog rescue in their barn and she was in between jobs, so she'd help.  But not long after she got there, she finds out their funding was cut out of the budget for next year.  They needed it for the roof of the community center, which collapsed under the snow.  She can't argue with that but where are they going to place the twelve dogs they have in four weeks?

Forever and Edelweiss let me read this book for review (thank you).  It will be published September 29th.

She went downtown to get some snow pictures.  While she's there she backs into Ben and spills his cup of coffee down his front.  He's the one she complains to about shutting down the dog rescue program.  He suggests she dress up the dogs and take their pictures and he'll feature them as the twelve dogs of Christmas.

That works!  Soon they are getting applications for some.  Ben even goes out and helps with the dogs since he found out his niece was doing it.  He had an issue with her because he thought she lied to him and he grounded her for a few days but soon she was back helping.

Eventually Ally admits she loves him.  He just stares at her.  So she leaves the event and walks back home.  She doesn't want to go back to New York after all but now her grandparents are talking about selling the farm.  They're going to go in the old folks home.  What can she do?

And what can Ben do to let her know he loves her too?