The Sorcerer's Apprentice by Gerda Muller 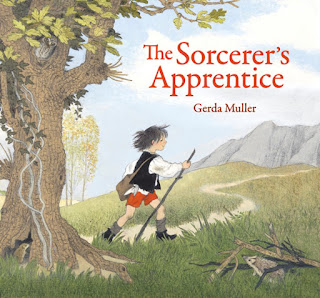 This is a beautifully illustrated story that adds to the charm of the story.  He's a homeless orphan and no one cares.  He decides to follow two cats and see who feeds them.  Maybe they would have food for a young boy, too.

Floris Books and Edelweiss allowed me to read this book for review (thank you).  It will be pub;ished September 29th.

The man who answers the door invites him in and asks questions as he eats.  He's a sorcerer and he needs an apprentice.  The boy anxiously asks for the job.  He gets room and board and has to work.  He finds his jobs all tedious.  Housecleaning, bringing water in and the like.  But he does get to find herbs and plants and crush them with a pestle, and gather other things for the sorcerer.

He asks to learn spells and he tells him one.  He also tells him never to use it when the sorcerer is not around.  But the next time the sorcerer is out, he uses it on the brooms to bring water in.  They're doing a good job but they don't quit and he doesn't know how to stop them.  Soon he's flooded their cottage and most of the village.

The sorcerer is angry and tells him he's fired.  But he begs for his job back and goes out on his own and helps all the homeowners clean up.  They are pleased with him and tell the sorcerer so.  When he goes back and asks for his job again, he's warned against not listening to the orders and rehired.  Things went on well from there...