One for the Books by Jenn McKinlay 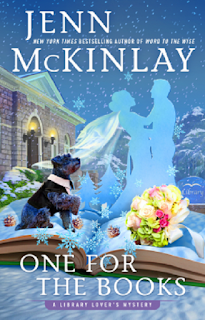 Lindsey, library director and Sully, boat captain are going to get married soon.  They are deeply in love and excited about the marriage.  But when they find a man dead on his parent's island, it throws a wrench in the business.  That man was Sully's friend and he was going to marry them...

Berkley and Net Galley let me read this book for review (thank you).  It will be published on September 1st.

Sully wants to find out who murdered him.  Then they have a hard hunt ahead if them to find soneone who can marry them.  Their options are limited in a small town.  As they ask questions and begin their search, they have no idea how dangerous it's going to become.

The main suspect is missing and can't be located.  The wife is another suspect except she doesn't inherit anything like they thought.  So is she or is she not?

The man had an affair with his brother's wife and says her last baby is his.  Not true but he won't give up claiming it.  The brothers fight.  Could Nate have killed him?  Nate confesses, they put him in jail.  Then his wife confesses and they are both in jail.  Is anyone telling the truth?

When they find a dead body on the boat that was in storage (it smells), it was the main suspect.  And Lindsey knows who killed him.  It's a bit late though.  The killer and the lawyer are in another boat shooting at them.  Will Lindsey survive long enough to get married?

Email ThisBlogThis!Share to TwitterShare to FacebookShare to Pinterest
Labels: Book Faerie, book review, Jenn McKinlay, One for the Books