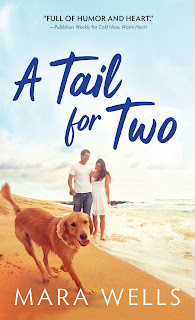 Lance agrees to take care of his little brother's dog.  He had no idea doing so would turn his life upside down...

Sourcebooks Casablanca and Edelweiss let me read this book for review (thank you).  It will be published September 29th.

While he's at the dog park, he sees his dog he had while married with a three year old boy.  He gets angry.  She wouldn't let him have the dog but she must have given it away.  The dog and the boy come to see him.  And not long behind is his ex-wife.  It seems the boy and the dog are both Carrie's.  He asks how old the boy is and if she has a boyfriend.  She tells him the boy's birthday and admits she doesn't have a boyfriend.  She's looking, though.

It takes him a bit but then he realizes he and she had a final fling after the divorce, and the boy is his son.  He wants to be in his life and be a father.  She's hesitant.  She doesn't want him around all the time.

She needs his skills to rehab a bathroom on one of her jobs.  He can use her skills in the building he's renovating.  They are going to see each other if she wants to or not.  She starts dating his architect and uses her ex-husband as a babysitter.

It doesn't take long before Adam tells her he can tell she's still in live with Lance.  He says Lance love her, too.

Will Carrie get past the walls of the past and accept Lance?  Will they have their son, their dog and a happily ever after?