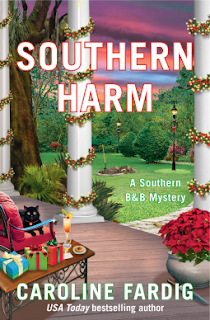 They are just doing some landscaping in the back yard of Tucker's aunt's house when Quinn digs up a skull.  This is really a cold case, going back thirty-three years.  The girl who said she was leaving never made it.  But when they jail Aunt Lela as murder suspect, the sisters go back into action as detectives.  They know she didn't do it, so who did?

Alibi and Net Galley let me read this book for review (thank you).  It has been published and you can grab a copy now.

Quinn and Delilah are running a bed and breakfast with the help of their grandfather but they have time in between things to question people about the new graduate buried in the back yard.  Some cooperate better than others.  They begin compiling suspects and arguing with each other over who should go on the list.  Tucker works with them and adds his thoughts, too.

Then the cops arrest Quinn and Delilah's mother and father as suspects.  They knew her but they hope they didn't kill her.  Now the investigation gets stepped up.

I was surprised by who the killer was.  The actual killer has no remorse for the murders...