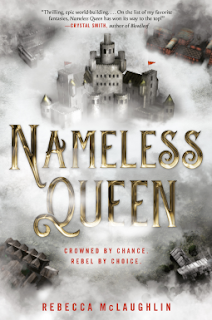 She's a thief that lives on the street.  She's one of the nameless.  They have so little value they are not even given a name.  So when the King dies, she doesn't really care.  But then she finds out that the next heir named is not at the palace...

Crown Books for Young Readers and Net Galley let me read this book for review (thank you).  It will be published January 7th.

She has the tattoo they are looking for and they take her to the castle.  She begins her time there in the dungeon while they debate how this could be true.  An orphan raised nameless can't become queen.  But she possesses the tattoo.

They eventually move her into the palace but the general there intends to kill her to get the tattoo so she can rule.  There is an event where people sign up to fight her in hopes to gain the tattoo.  It's deadly.  But most don't know she has a sister with the same tattoo.  The General does though.  When she can't beat the Nameless one, she stabs the sister trying to get her tattoo.

This is a busy story with nameless missing from the streets to another army being built up.  The general wants to kill all the nameless and only the present queen stands in her way.

Who will win the final battle?
Posted by Journey of a Bookseller at 8:00 AM