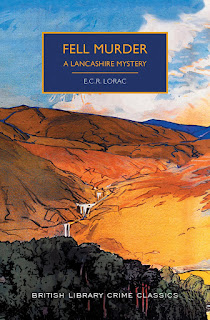 They lived in the old family home on the farm on the fell.  They were a bit of an odd family.  Their father was still alive and working the farm even if he was in his 80's.  He was also still ordering his children around, too.

Poisoned Pen Press and Edelweiss allowed me to read this book for review (thank you).  It will be published January 6th.

The oldest boy was thrown out of the house twenty-five years ago.  He went to Canada with his wife.  When she passed away he took to the seas.  No one on the farm knows where he is or how to contact him but the neighbor met him on the Fell and he told him the route he was walking before he went back to his ship.  His young stepbrother heard the conversation because he was sleeping in the sun on the other side of the rock wall by his beehives.  The sailor said he had no desire to visit the farm and took off on his jaunt.

The next boy in line is Charles.  He ran a business in Malaysia until he lost it and he has no interest in farming.  The daughter is the farmer.  She wants her own place, not the farm.  The youngest boy is weak physically and has a crush on the female hired hand.

The local police hand it off to Inspector MacDonald.  After questioning everyone, he sets a trap for the killer.  The killer walks into it.

There's lots of action, tons of questions and needless death in this story.  It's a good mystery.