Voyage of the Frostheart by Jamie Littler 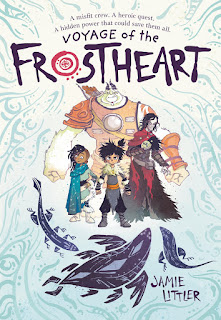 Ash's parents went out as Pathfinders do to get supplies but they never returned.  The village he lives in has put him in foster care.  He loves to sing and that makes the villagers nervous.  They've heard of song weavers being taken over by the monsters under the snow who like to eat humans.  They try to keep him quiet, but it doesn't work.  Singing the lullaby his family taught him makes him feel better.  When the last family returns him to the head man, it looks like he might be exiled.  Instead, a Yeti that allowed to join their village says he'll take him in.

Viking Books for Young Readers and Edelweiss let me read this book for review (thank you).  It will be published November 5th.

The Yeti lives right outside the village.  He begins training Ash in the art of defense.  He also tries to teach him patience and to slow down his singing.  But when another pathfinder ship is coming with thee snow monsters after them, Ash sings to the monsters and calms them down.  The pathfinder makes its way in with no casualties.  He expects the people of the village to be proud of him.  Instead they exile  him.

He and the Yeti have two weeks to decide where to go.  He decides to see if the captain of the pathfinder will take him with them.  She says yes, but when he goes in his little tent, he finds the Yeti waiting.

The Yeti has him working out again but he doesn't encourage his singing.  One man on the ship does.  Now Ash isn't sure which adult to follow.

More monsters show up, their ship gets wrecked, and the village they took refuge in is planning on sacrificing them.  Can Ash save them?

This is a very exciting read with a lot of action.  I enjoyed it.  So should young adults.