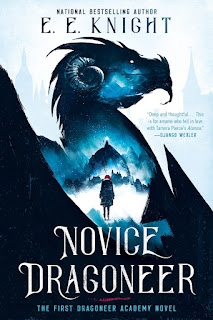 Ileth is fourteen and when she met a Dragoneer and her dragon she developed her own goal of becoming one, too.  When she gets old enough to apply as a novice, she runs away but she gets there too late.  She's sent to the back door but the guard won't let her in there either.  So she spends a week on the stoop, getting water from the river below and eating what she can find.  As the first batch of applicants is let go, someone comes to let her in.  He shows her where to go for sleep, where to eat, and where to work.

Ace and Edelweiss let me read this book for review (thank you).  It will be published November 5th.

Her job is processing fish.  She has a mean bully as a boss and nothing she does pleases him.  When he gets her alone, he tries to rape her but she knows how to defend herself from that.  As her troubles with him multiply, she challenges him to a duel.  There are rules for duels.  She follows them but he attempts to kill her after the match has been stopped so he's fired.  She still has to watch for him in case he sneaks back in.

She learns to dance for the dragons and enjoys it.  Then they assign her to an old dragon to dance for him, stay with him, and try to get him to eat.  He tells her tales of days past and does eat a bit.  He even saves her from the man who wants to kill her but he's not long for this world and she mourns him.

Next she gets assigned to riding dragons.  She got on one when she met the Dragoneer so she knows that much.  Then the dragon takes her for a short ride.  The next time she comes in they assign her to another dragon.  She fearfully discovers she's on a dragon delivering mail and she gets to see a lot of country.

She seems to get in trouble all along the way but she's learning and getting better everyday.  If you like fantasy, you'll like this story.  There will be more in this series.

You do come up with some great ones. Cheers