The Last Human by Lee Bacon 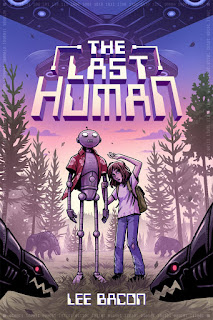 The humans are gone.  They developed robots that became smarter and more developed as time went on.  Then one day, the robots rebelled.  Now it's a robot world.

Amulet Books and Edelweiss let me read this this book for review (thank you).  It will be published October 8th.

When the robots see a little girl peering at them from the trees, they're taken aback.  They are a team of robots that work together and this is the first time they've seen a human.  They cautiously speak to her and she does the same to them.

As she tells them how the humans have been living underground in a shelter, she also confesses they have some sort of virus and they've run out of antibiotic.   She needs to go to another point on the map to get more.  She asks if they will go with her because she's scared.  They agree knowing the dangers and they set out on the long journey.

It's an exciting journey.  They have other robots and drones after them.  The one she first talked to slides down a cliff face, and she saves him with the help of the other robots.

They eventually get caught and the president plans to make an example of them.  There can be no secrets from the hive.  But it gets turned around on him when they play archived footage of the humans before they were exterminated.  That showed their love, their kindness and the good they did but it was withheld from the hive...

Despite what they did and how they did it, this has a happy ending.  Even robots can show some compassion.

I am going to order this one. Thanks!