The Mistletoe Matchmaker by Felicity Hayes-McCoy 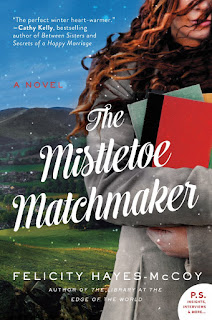 Cassie trains as a hairdresser so she can travel and still be able to find work.  Herr father and her uncle are both Irish but they won't go home for a visit.  So Cassie decides to go to Ireland and meet her grandparents herself.

Harper Perennial and Edelweiss allowed me to read this book for review (thank you).  It will be published October 8th.

Cassie gets a feeling of home there.  She also runs into various marital problems between the folks she knows.  A divorced woman lives with her mom.  Then her mom invites her ex-mother-in-law to live with her.  She enjoys her MIL but it's strange that her mother is that close to her.  Her grandmother thinks her grandfather might be having an affair.  She gives advice to other ladies about moving on after divorce or death.  Then she finds out her boyfriend, who wants to sleep with her before she goes, is engaged to another woman.  That ends that.

Romances live and die. There's competition between the local towns for the best Christmas festival.  That almost becomes a fiasco when the cops show up looking for illegal hooch.  With several underhanded actions, the Spanish booze disappears and there are no charges.

With life, love, and laughter everyone settles down to their new lives.  Grandpa has been going to the hospital for tests and his heart is giving out on him, so he and his wife decide to enjoy each day left doing things they like and enjoying each other's company.

One more special thing happens before the end.  While there is some sadness, you see the personal strengths of the men and women who adjust and keep moving forward.  I enjoyed the humor in the story.