The Dollmaker by Nina Allan 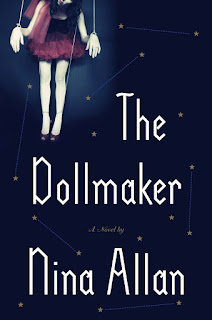 Andrew makes dolls.  He's been fascinated with them his whole life.  He's a small man, almost a dwarf.  He has relationships but most don't last long.  His dolls and the woman he shares letters with keep him going.

Other Press and Edelweiss allowed me the opportunity to read this book (thank you).  It will be published October 15th.

The woman he writes to he met through an ad.  He gradually realizes she's in a home.  She seems to be in good health  so he thinks her problems must be in her mind.  That doesn't bother him.  She writes coherently and tells him her secrets.  He finds himself falling in love with her.

This is a fairly long tale filled with the minutia of his every day life.  He makes good and bad decisions (as do we all) and he eventually gets to meet her.  He had to sneak in to find her and they evict him.  She says she's leaving the home and will get in touch with him later.  Will she?  It's a good thing he has his dolls to keep him busy...