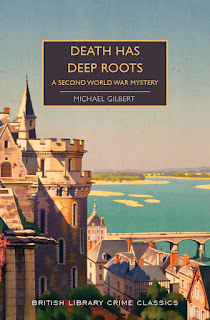 Victoria screams when she finds a dead body.  Then she is accused of murder.  Her first lawyer wants her to plead guilty, so she asks for another.  The new one interviews her.  He knows it looks bad but he believes her.

Poisoned Pen Press and Edelweiss allowed me to read this book for review (thank you).  It will be published November 5th.

She's been through a lot.  Fled her homeland, went to France, got caught by Gestapo there, had a baby while incarcerated, the baby died before it was very old, she managed to get away and now has a job at a hotel.  She'd been asking to see the dead man to inquire if he knew if her lover was still alive.  The other side suggested he was her lover but she denied it.

While the trial is going on, the defense team has a man on the ground checking out facts.  Someone wants him to stop and tries to warn him off.  He's getting closer to something that might help his dad in court when he gets jumped by bad guys.  He gets slashed by a knife but he keeps going.

The real killers and thieves are in plain sight but they lie well and give nothing up.  It's only when they don't appear when called to court that folks become suspicious.