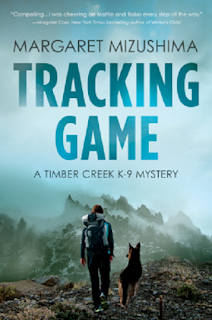 The story begins with a murder.  Someone shot the young husband and torched his van.  Mattie and Cole heard the explosion at the dance so they raced out to see what happened.  As they start sorting through facts, they find that some of the man's time isn't accounted for.  He didnn't go where he said he was going and he was back early.  The more they dig the worse it gets.

Crooked Lane Books and Net Galley let me read this book for review (thank you).  It will be published November 12th.

They are tracking in the woods above the road he was killed on and they find another dead man.  They also have a run in with a big cat.  The worse part, the cat was chewing on the man. At least he was already dead.  They try to convince her it was a mountain lion, but she knows what one of those sounds like and it wasn't that kind of growl.  The wildlife expert agrees with her.  The footprints are bigger and different shaped.  It's a tiger...

With the sheriff and his deputies, two dogs and their handlers and Cole they go looking for the tiger.  They know it's dangerous.  It's got cliffs the cat could jump from or the hunters could shoot at them.  But they want to save the cat and take the hunters into custody.

Who's going to succeed?