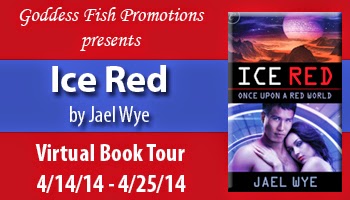 Bianca is very close to getting a position within the company owned by her father.  Her stepmother is the current manager and isn't enthused about the idea.  But Bianca is determined.  Unfortunately, so is Victoria...

Goddess Fish Blog Tours and the author shared a copy of this book with me to read for review (thank you).  It's a Corina Press edition and is now available for order.  Please note there is graphic sex in the story, so don't buy it if this offends you.

This is a rollicking good sci fi adventure.  Almost everybody is a different breed in space; earthlings are a minority.  Bianca's father is an engineer and lives in his world of engineering concepts and projects, not paying much attention to his wife or daughter.  Victoria is quite happy with this because she has plans to take over the company and maybe even rule the world.  Being shy isn't her style.  What she can't get with money, she uses sex to conquer people.  She's mean and she's a killer.  Too bad Bianca didn't realize that sooner.

Victoria sends Bianca to look over a mine recently acquired  and make recommendations on how to proceed.  What she's really doing is isolating her so she's easier to kill.  After all, she'll just seduce the mine owner and then she won't need Bianca's recommendations.  She knows what she's going after and she knows how to do it.  Imagine her surprise Cesare won't sleep with her and can't be bought!  Not only that, he's going back to the mine that Bianca is looking over.

Things are a bit touch and go at the mine.  Bianca works for the enemy, even if she doesn't know it.  Cesare has to save his team and his mine from her.  When someone starts trying to kill them both, they have no choice except to team up and try to escape danger.  Not only does it raise their adrenalin, it raises the sexual tension, too.

The ending surprised me and pleased me both.  I could have used a bit less graphic sex, but that's me.  The story itself is very good and well thought out.  There's another book in this series that I have already requested so I can read and review that one, too.  That should tell you how much I liked it.


Jael will be awarding an eCopy of Ladder to the Red Star to a randomly drawn commenter during the tour.

Happy reading!
Posted by Journey of a Bookseller at 2:00 AM

Thank you for the lovely review!
Best,
Jael Wye